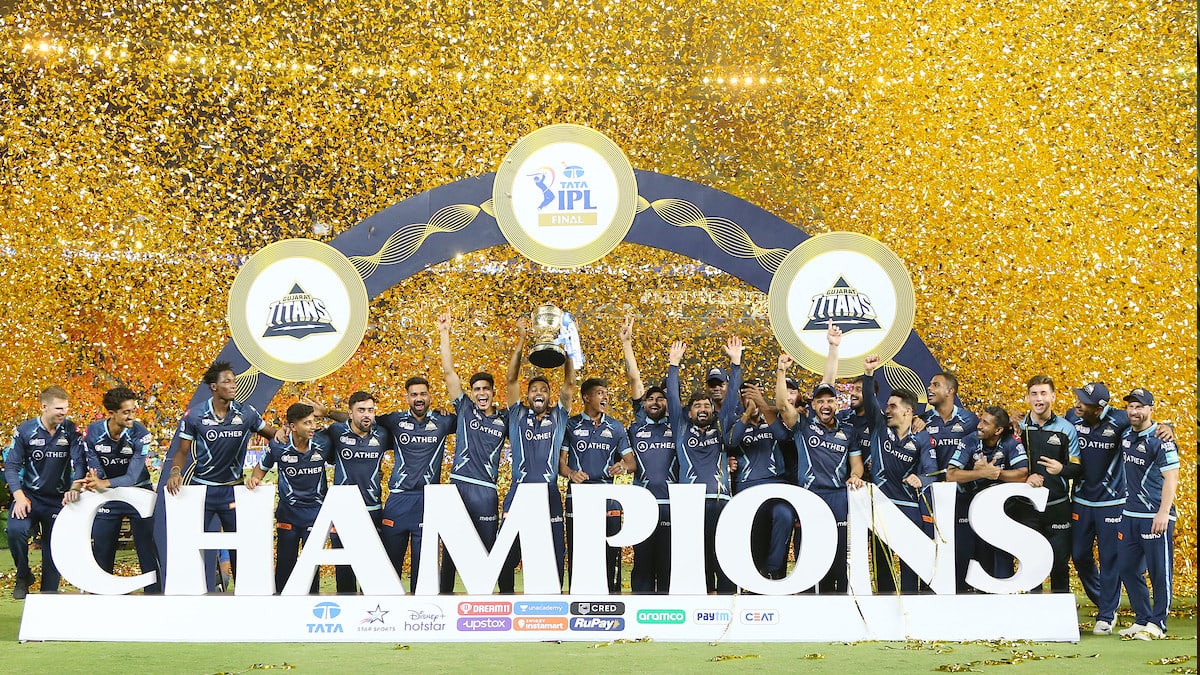 The Gujarat Titans (GT) were crowned champions of the TATA Indian Premier League (IPL) 2022 after defeating the Rajasthan Royals (RR) by 7 wickets on Sunday at the Narendra Modi Stadium in Ahmedabad.

The Gujarat Titans (GT) were crowned champions of the TATA Indian Premier League (IPL) 2022 after defeating the Rajasthan Royals (RR) by 7 wickets on Sunday at the Narendra Modi Stadium in Ahmedabad.

Hardik Pandya led from the front with an all-round performance which powered Gujarat Titans to their maiden IPL title after a clinical 7-wicket victory.

Chasing 131 to win the final, GT lost Wriddhiman Saha’s wicket early after Prasidh Krishna went through the opener’s defence and knocked the stumps. Trent Boult added pressure by bowling a magnificent maiden over with the new ball.

Matthew Wade whacked the first six of the innings before the left-handed batter was caught inside the circle as Boult scalped his first wicket. Shubman Gill creamed a four at the end of the powerplay as GT moved to 31/2 after 6 overs.

Skipper Hardik Pandya joined Gill but RR kept things tight with the ball and created pressure. GT were placed at 54/2 at the halfway stage and required 77 off the final ten overs.

Pandya switched gears and added two fours followed by a maximum against Ashwin as the fifty partnership was up for the third wicket.

Yuzvendra Chahal put an end to the partnership with a brilliant delivery that turned sharply to dismiss the GT skipper, who was caught at first slip.

GT were 97/3 before David Miller, who walked in next, conveniently took the pressure away with his elegant strokes and brought the equation down to 22 off 24.

Miller added two more fours as the next over produced 13 runs. Gill, who anchored the innings brilliantly at the other end, finished the game in style with a maximum as GT chased down the total with eleven balls to spare.

arlier, RR, who opted to bat first, remained unchanged while GT made one change – Lockie Ferguson replaced Alzarri Joseph in the eleven.

RR openers – Jos Buttler and Yashasvi Jaiswal started cautiously with the bat after the GT pace attacks added pressure with the new ball.

Jaiswal was on the move with two sixes before the RR opener was caught by Sai Kishore off Yash Dayal’s bowling in the fourth over. Skipper Sanju Samson joined Buttler at the crease as RR moved to 45/1 at the end of the powerplay.

Buttler then took on Ferguson’s fiery pace and struck two consecutive fours. GT skipper Hardik Pandya introduced himself into the attack and dismissed the opposition skipper after Samson miscued the shot and was caught by Sai Kishore.

RR were placed at 71/2 at the halfway stage as Buttler ensured the flow of boundaries from one end. Rashid Khan was finally rewarded with a wicket after being economical in his first two overs as Devdutt Padikkal was caught at backward point.

Pandya claimed his second wicket to dismiss the dangerous Buttler, who was caught behind for 39. RR were 6 down after they lost the wickets of Shimron Hetmyer and Ravi Ashwin in quick succession.

While Hetmyer was caught and bowled by Pandya, David Miller took Ashwin’s catch at long-on off R Sai Kishore’s bowling. Trent Boult was the next batter to depart after Rahul Tewatia grabbed the catch and Sai Kishore claimed his second wicket.

Mohammad Shami uprooted the off-stump to dismiss Riyan Parag on the final delivery of the innings and conceded only 7 runs as Rajasthan Royals finished with a total of 130/9.

Related Topics:cricketHighlightsIPLIPL Final
Up Next